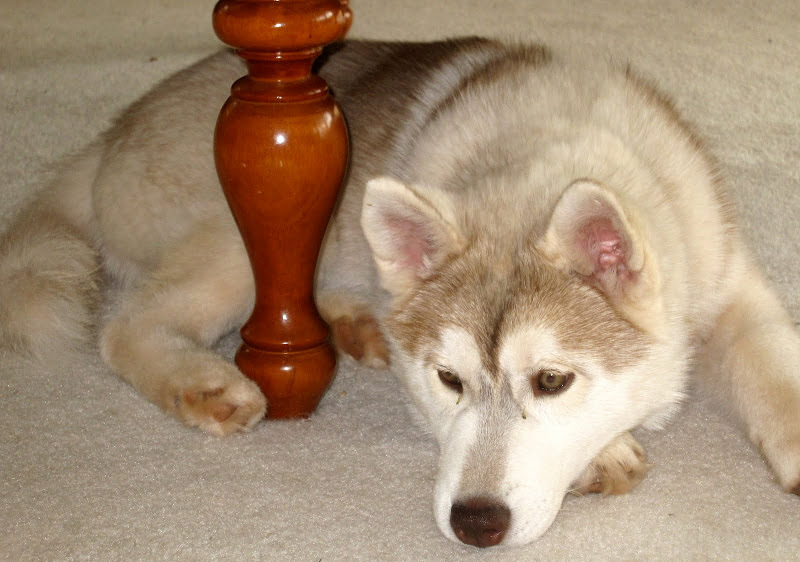 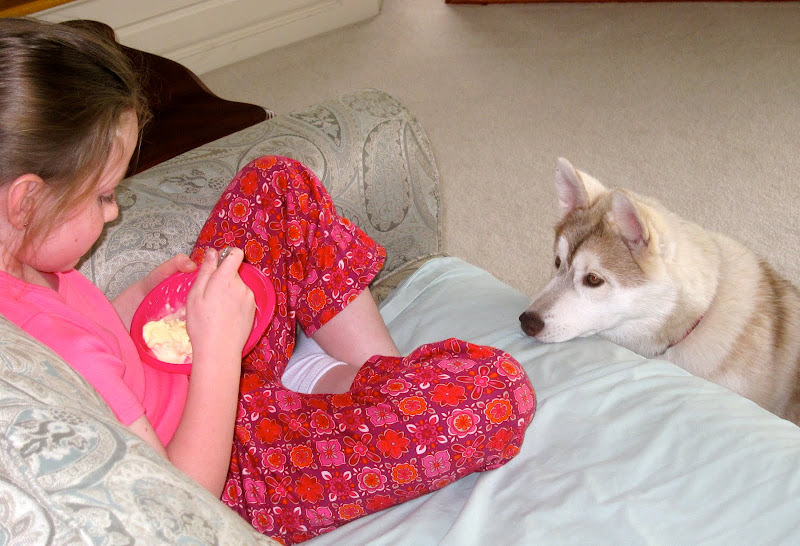 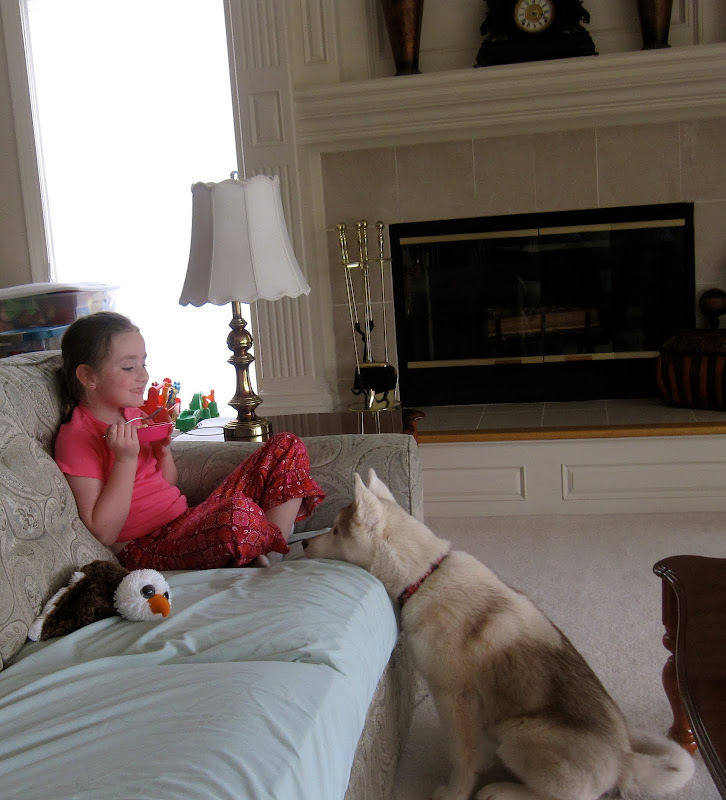 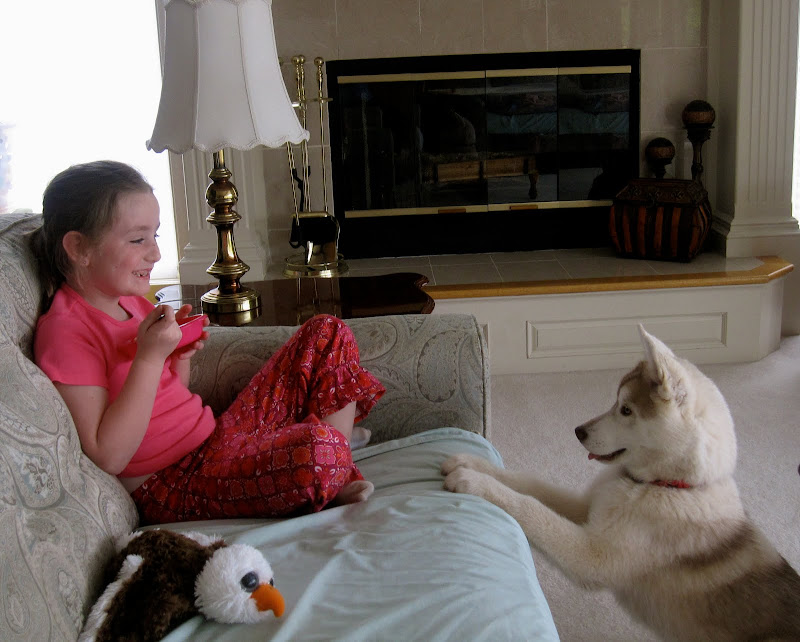 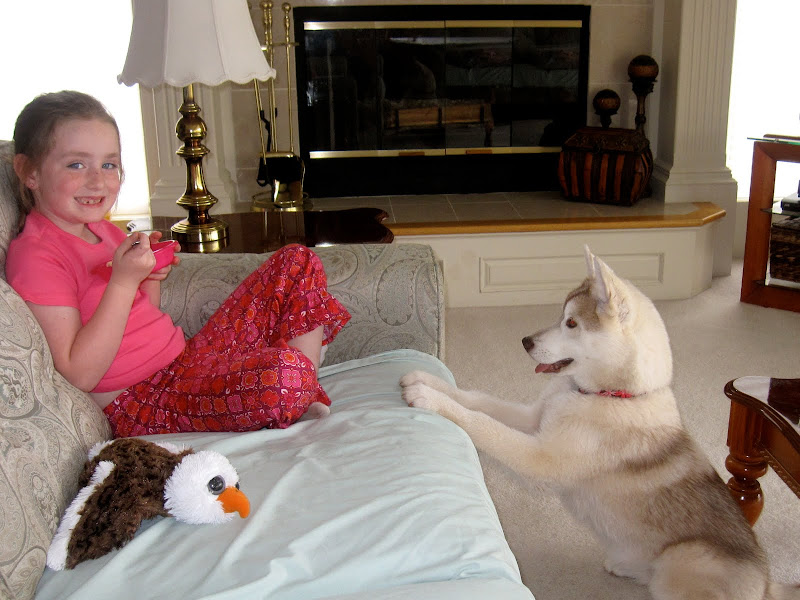 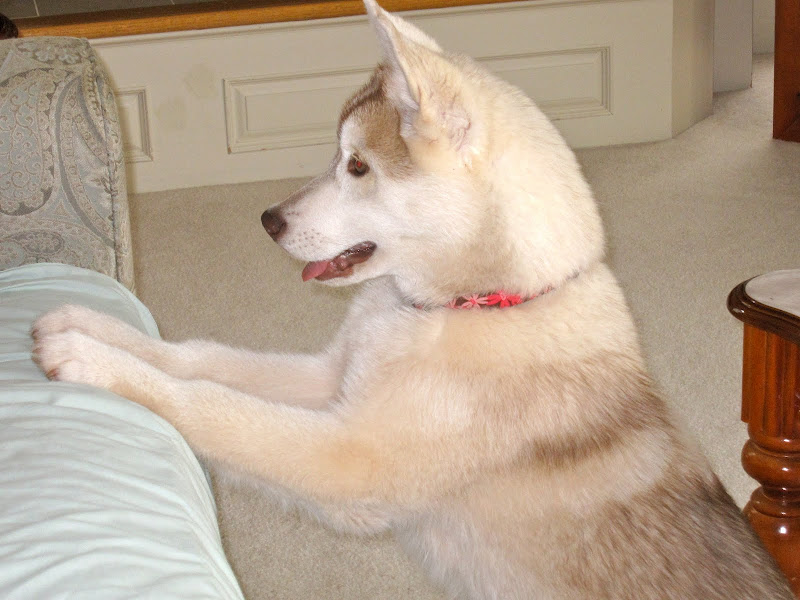 NAK and The Residents of The Khottage said...

I think Thunder and Phantom better start eating their Wheaties!

Pawesome pikhs with the little bi-ped too!

Who khould refuse either of their smiles?

awww.. isnt she just so cute!!
so is the little girl! i would lick her all over.

ciara is getting bigger!!

I agree with Khyra, the boys are gooing to be faced with what my Mother would call "a tough little nut"!

Yesterday and todays posts were both just wonderful.

Poor Thunder!
Is your tail okay?
Ciara sure is growing..!
Great video!!

OH my DAWG! she's getting so HUGE! so fast! Miss Puppy Pantyloons!

the photos look like she's bigger than in the video.

LOOOOVE how Phantom play bowed her and played with her! it was so nice to see! yay! maybe he's starting to catch on that she's getting much bigger now and he should be nice to his sisfur!

And Poor big brother Thunder! The patience of it all, you sure can fight your own battles Miss Ciara!

See you at Date Night! I see you are dateless also!

I think Phantom has done a good job teacher her respect. Thunder! Get a grip on yourself. She is totally dominating you all biting and pulling on your face like that.

Ummm.. i think you need to Triple Team her- i'll be right ovah! sooo pesky:)

Thunder, dude, you are being so owned by the little sister. Love she is using the chair as a "big brother can't follow me here" block.

Glad to see Phantom starting to play, er referee, some.

Very nice play session there.
That is a super cute little two legger you guys have.
Is that an Iggle I see there???

I really love your sequence of beautiful picture's today! The two puppies (canine and human) are the cutest ever. Ciara is looking gorgeous! Quite a handful, I imagine!
Lotsaluv
MAXMOM IN SA

Ciara is growing up so fast we loved the pictures of her with the grandbean in today's post.~AFSS

Oh wow, go Ciara, go Ciara! He he he! What a wonderfully confident doggie you're growing up into, it's great! We also think your big brothers have the patience of a saint! Good for you boys!!

That is adorable!! I love the video. Ciara is really getting the hang of playing with her brothers...she's not going to run away and hide!! The first pictures are so cute!! Lots of love, Debbie and Holly

Awwwww so cute!!!!! I guess all huskies do the chin on the couch thing. Storm does it too and it's adorable even nine years later lol.

She sure is learning how to play dirty early isn't she? :D

Nice pictures of Ciara begging and that video is terrific. We love to play like that too.

Love bof sides of Ciawa!!!
and the little hooman pup is adowable too.
Thanks fow the gweat pictoowes and video
smoochie kisses to All of you
love
Asta

You are sure a pistol, Ciara!
So did you get any cereal?

Love ya lots
Maggie and Mitch

Sassy doesn't even begin to tell the story. Some bruvvers have an awful lot of patience to put up with their little sister.

Add a bit of humping action.

Ok, can Ciara be any cutter with your granddaughter?!!?!?! She is a little sassy thing!!!

We love her playing video!!!

We agree with Khyra you 2 better start eating your weaties. That Ciara is growing up fast and is pretty hard to get the best of.. Funny Callie grabs Marley by the ears and pulls her down too. The tail grab is pretty cute though. Us heeler's go for the heels..

GREAT photos of the little girl and Ciara... And, I love watching puppy play. It looked like there was some tail-biting underway. That's a technical foul, two free shots for the grown-up!

Phantom looks like he wants to play but is a little nervous and Ciara is afraid. I bet that they'll be great friends before too long!

That Ciara is just toooo cute!

Ciara has the begging technique down pat! Thunder is so patient with her and Phantom looks like he wants to play. They are all so fun to watch!

Ciara is a very cute littl beggar. we think she can have anything she wants. especially with those wrasslin' moves. she's a tough little kiddo! and adorable! what a winning combination.

Ciara, you're growing WAY to fast, slow down.

Ha! Ha! Get that tail Ciara! Your a funny pup! We thinks that you are wearing the boys out!!

She is so ADORABLE! (The little biped's adorable too). But whatch out - heere she comes!!!!

Brandon - The dog with a blog said...

Aww, can you come over to my house for the weekend??

I can't believe how much she has grown since I've been able to blog (Florida trip, then hospital stay)...
Be nice to her Thunder and Phantom, she's only going to get bigger!
I've missed you all,
Kit

RILEY AND STAR MY MALTESEKIDS said...

That's the cutest thing we have ever seen! No wonder you can't get Phantom to play with you! You are for sure the Alpha of the pack!

Loved the title. It said it all. Very sassy! Love it. The video is too cute and Phantom's photos are gorgeous. I don't get how such a handsome guy like Phantom doesn't like his photo taken. Both Houdini Linguini and Frankie are grateful for the lovely and encouraging comments.
Mwah!!
Twinkie and pack

Perfect begging poses Ciara. Surely you got given something with those moves!
Liffeys licks to you

My goodness, Ciara! If I hadn't seen the video I would never have believed it! :-)

We love that smack down action Ciara!

Ciara is adorable & a handful all at the same time...

Loved the short time out for a few Deck Zoomies...

they are so sweet :)
i read and watch this post and want to have a kid and a dog :)

Photo #4, cutest photo ever! I keep looking back and forth at the pup and the little girl, each is cuter than the other! :)

Ciara!!! We were gone a week and you went and grew up so big! Nice moves Ciara! Loved the tail grabbing. BOL

Ciara and Thunder are so cute -- it's like Mini-Me!

Hi!
Thank you for visiting my blog! I'm so glad Sue sent you over to see "Do Your Ears Hang Low?" I am stunned that Sue was so in love with that "ear" post because that post took the LEAST amount of time to write, but I agree it is cute to see sooo many fabulous ears in one sitting!
Your blog is beautiful! Your dogs are beautiful! You must have the best camera in the world (and the best dogs, etc) to capture such clear, bright photos!
I am a new follower now!
April 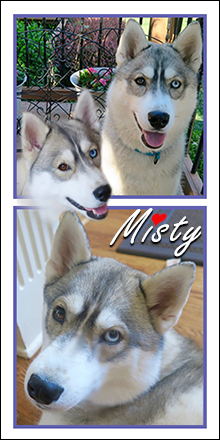