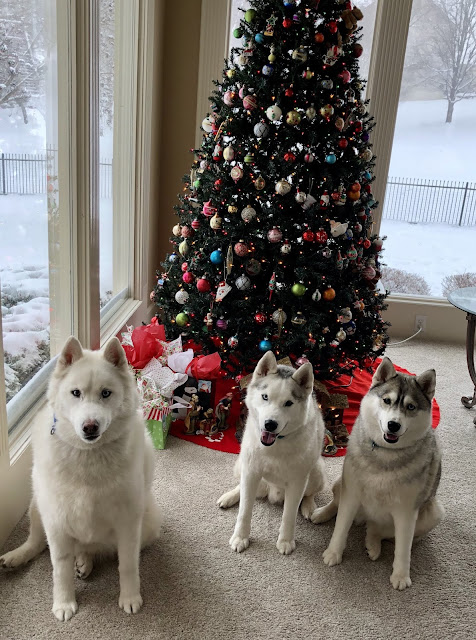 Finally a decent snowfall has arrived.  We might end up with 7-9 inches of the white glorious fluff by the time the second round of snow ends tomorrow.  That is music to our Siberian ears. 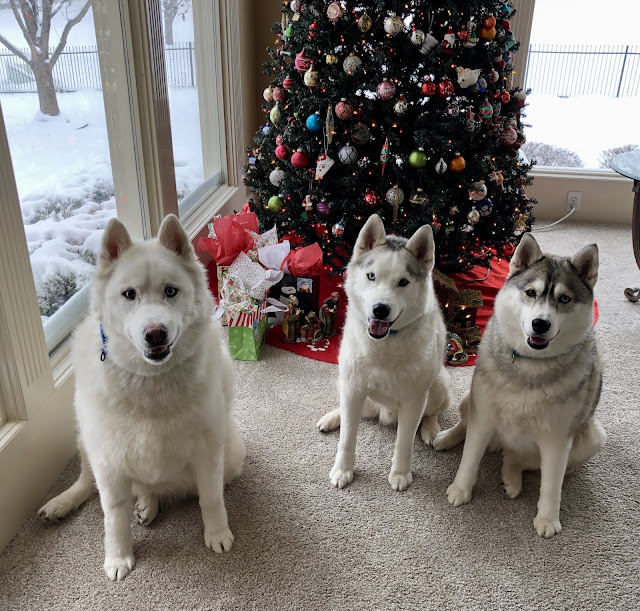 Well, maybe not so much for Lightning because he can't go out and run in the snow:(

Speaking of Lightning, we sort of left you hanging last week about the Tooth Fairy, but life has been crazy here.  Last Wednesday he had a dental cleaning. The vet said his teeth actually looked very good aside from some tartar and one diseased molar way at the back of his mouth.  He had that one extracted, and he had no problems after the work was done.  The really good news is that the area where the cyst had burst open on his back several weeks ago finally healed on its own. He didn't have to have that extra surgery to remove it.  The vet was so good; he used a very light sedation approach on Lightning due to his recent seizure activity.  Aside from a day or so of "whining" for no apparent reason at home, he did just fine.  Typical Siberian who doesn't handle sedation well.  We are so grateful for the overall good experience. 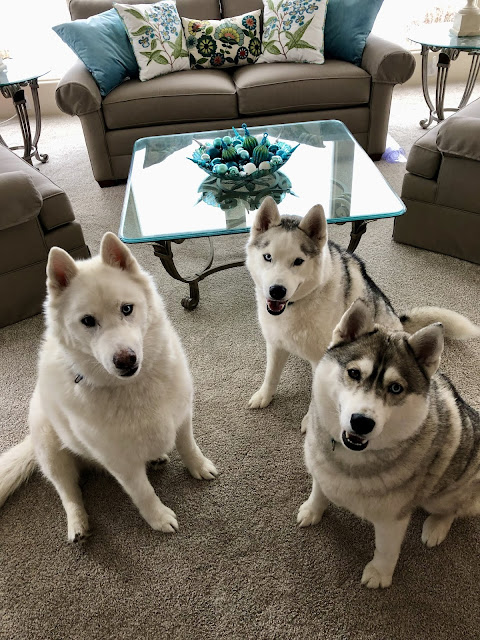 As for our Dad, we would really like to ask you for lots of POTP and prayers for him.  Our Dad continues to have some serious eye problems that really escalated this weekend.  His doctors are baffled as to what is going on in his "good" eye.  It could be scleritis, a corneal abrasion, a viral infection, or something else, OR some combination of all of them.  He had an emergency visit yesterday with the doctor on call.  Things are no better today but at least no worse.  He will see his regular doctors tomorrow hopefully.  His vision at this point is extremely poor.  Mom is working hard to keep his spirits up and to drive him wherever he has to go.  We really need his vision to be better.
Now to lighten things up a bit . . . 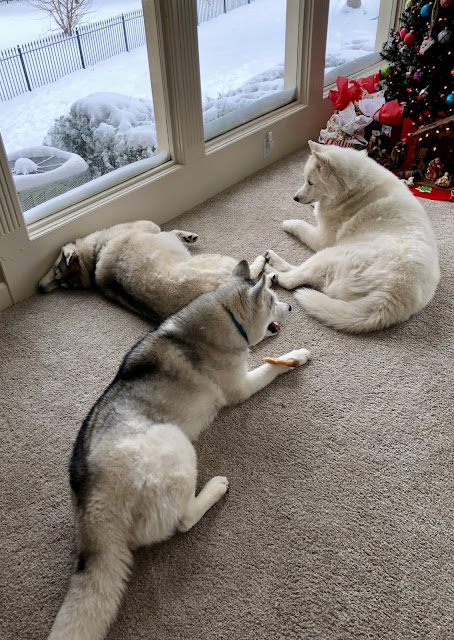 Lightning appears a bit perplexed by Misty, who is working hard at keeping an eye on Timber and his Benebone:) 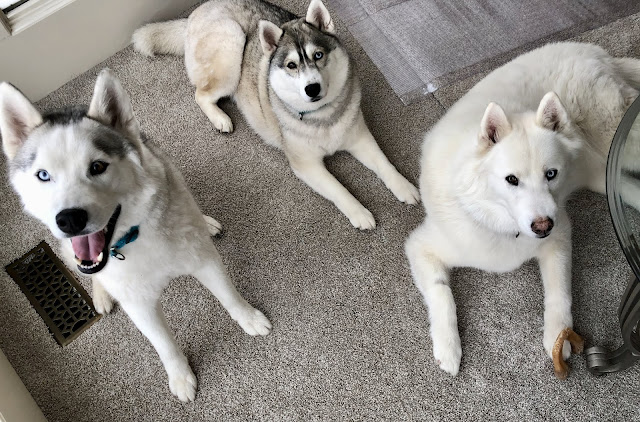 And here is Timber trying to tell Mom that he really isn't plotting to steal the Benebone from Lightning. 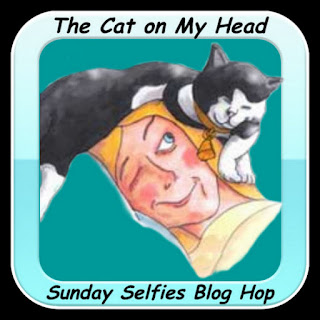 Our Little Bit didn't like sedation either. She would whine until that feeling passes. Fond memory right there. I'm glad about the cyst too. Far easier than surgery indeed.

Huge prayers for your hubby. I hope they can find out what the issues is with his eye and get it corrected.

Have a woof woof day all you pups. Prayers for your peeps. ♥♥♥

It's nice to see you pups again! Your tree looks beautiful! Thanks for the e-card you sent. Very nice! We're hoping things get better for your Dad. Sending lots of POTP and hugs.

Sending purrs to your dad xx

Precious Lightning, on top of everything else, a tooth extraction. I hope the Tooth Fairy was extra generous good boy. Sending purrs and prayers and POTP for your Dad's eye issue. Wishing all you darling Woos a good week.

I sure am happy to hear that Lightning is okay and we're all sending POTP, purrs and prayers to your Daddy and hope everything will be okay soon. We've been thinking of you all.

I am glad that Lightning's procedure went well and I hope that his seizures are controlled.

I am sending my strongest POTP to your dad, OP Pack. I hope that things turn around very fast.

In the meantime, try to enjoy the snow.

We are a little jealous of your snow. There is only a dusting on the ground here. We are keeping our paws crossed for your dad and hope the doctors can help him.

Hurray for snow and the good news for Lightning! Your tree is also perfect! We don't have ours up yet. Maybe this week!!

Have a good week my friends, and know that I'm sending all my best POTP for your dad, that the Doctors will be led to find a diagnosis to provide the needed treatment for his eye!

So many healing thoughts for your dad
So glad Lightening is better.
love
tweedles

You all pose so pretty around the tree. We are glad the dentist went well and the cyst had healed. Your poor dad. We are sending lots of prayers that they can find an answer.

You would have loved it here two weeks ago when we had 19 inches over 2 days. I will pray for your Dad. XO

Oh Lightning, this is good news my furiend! I am glads your toothers are FABulous, and you are even chewin' a chewy! WooooHoooo! Sorry you can't go out in the fluffy white stuffs and run...I knows you really wants to, butts it's best you let the youngin's do it so you don't hurt your leggies.
Misty, gurl, that is one freaky head-tilt! BOL!!! butts, you gots to keep an eye on the prize, rights??? BOL!!!
Kisses,
Ruby ♥

That's great that the sedation went well this time. I imagine he had a little pain after the extraction and was whining because of that. I know you three have to love this weather. I used to have an American Eskimo and he was ecstatic when it turned cold. Snow just added more joy to his world.

All three of you look ready for some winter fun and your tree looks totally splendid!

hugs and lots of POTP to your daddy... we hope you can share good news about his vision soon... and we are glad that you got a real sibe christmas with snow...

We're air freighting a ton of POTP across the Pond to your Dad, and we hope the humans V-E-T can come up with something that will help his eye.
Good news that Lightening survived the tooth surgery.
And best of all, YOU SIBES HAVE SNOW! And proper snow at that, not just a mere sprinkling.
Toodle pip!
Bertie.

We are so happy that you got snow and enough to have fun in! We are sending your dad tons of AireZen and healing vibes and praying that they get to the bottom of this.

We're glad you have snow...we know that has to make you happy. We're glad Lightning did well and are sending purrs and prayers for your Dad.

SNOW?!! We are so jealous, all we are getting is cold rain!

We send prayers for your dad...and we are glad that Lightning has done well and healed on his own, that's great!

Dear Wooful friends and Peeps,
You have our POTP x a million here for your Dad. I cannot imagine how scary it must be to have such serious and mysterious eye issues. Hugs and many Healing prayers.

What BEAUTIFUL snow you got and you all look very happy about it. We are happy that Lightning did so good after his dental work. We will absolutely keep sending tons of POTP for the Dad of the Woos about his eyesight. It's scary when we're talking eyes so we understand and hope that whatever is happening can be FIXED or at the very least no more deterioration occur. You all look READY FOR SANTA!

Tails Around the Ranch said...

Good news for Lightning. We are sending oodles of poodles of POTP for your Dad. Enjoy the snow (as much as huMom will allow). Hugs and tail wags.

Fabulous report on Lightning...glad he is doing well, even if he can't race around in the snow. But SNOW! That's wonderful!

Sending lots of POTP for your Dad.

We sure send good thoughts to the Dad and hope they can fix him up. Glad you Woos have some snow. Poor Lightning. Have a great day.

we are happy you have snow and Lightning is doing well. Sending tons of POTP for your Dad and will keep all of you in our prayers
hugs
Mabel & Hilda and Mom