Friday Funny with Timber and Finally That Update!!!

Timber has found a new way to use his bed while he takes a nap:) 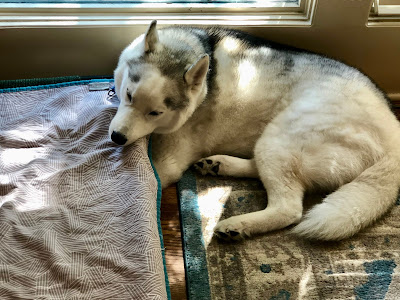 Pay no attention to the Momster, readers. Truth be told, SHE washed our bed blankets and I don't like the way they smell - Timber. 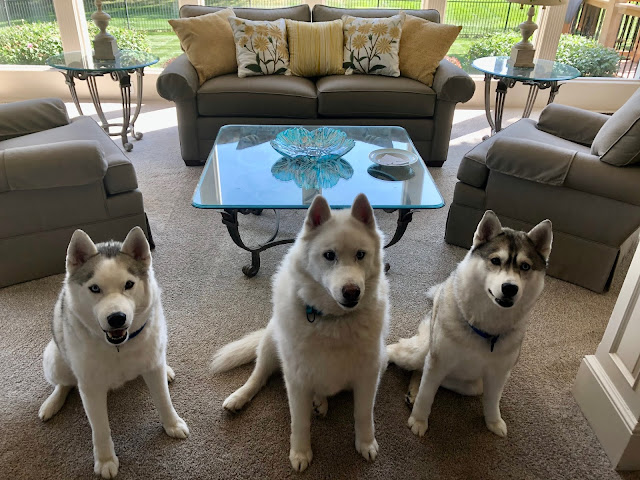 We promised an update a couple of days ago, and we didn't get to it.  Mom's schedule has been a bit out of whack for a couple of weeks now.  The grands are back in school, so she is back on chauffeur duty.  Trying to fit in Misty's walks and Dad's multiple eye drops makes for a full day - not to mention that with the nicer weather Timber and Lightning are also getting multiple walks too.  We do try to keep Mom in good shape:)

Misty saw her surgeon two weeks ago, and all was well.    Her latest x-rays look great.  It has now been 12 weeks since her first knee was fixed and six weeks for the second one.  The surgeon will see her one more time in two weeks. At that point we expect him to give her a full go-ahead signal.  Then Mom will start to let her do a few stairs at a time, and she will get some short periods of off-leash time in the backyard by herself (with Mom supervising:). Then in a while longer she may get to join Timber in the yard again for short play times.  We are so happy with her progress.

Timber was sick off and on for the past two weeks. He is doing well now.  He managed to get one of the decorative balls that sit in a bowl on our sofa table.  We think it got knocked off without Mom noticing.  He would never jump up and get it himself.  It was a styrofoam ball covered with small leaves.  Based on the number of leaves Mom found on the carpet, we are pretty sure he only ate a few of them.  But it was enough to cause some vomiting and loss of appetite.   Thankfully there was no blockage.  He got some meds for his tummy and was doing better.  But a few days later he stopped eating again.  He has a sensitive tummy under normal circumstances.  So a little more meds and now all is well.

The biggest worry has been the oldest granddaughter. She was driving home from school two weeks ago day and was involved in a bad accident. She had a green light at an intersection that had a flashing yellow turn signal.  She was headed straight (never had to stop for a red light) when a girl coming from the opposite direction never stopped or slowed at the yellow flashing light that SHE had and turned in from of K, hitting her almost head-on.  K was driving a big Jeep Rubicon while the other driver was driving a Jeep Wrangler.  The Wrangler spun K's Rubicon for two full rotations.  Thankfully K is fine although she did have a mild concussion, some severe bruising on her hip and shoulder from the seat belt and airbags, and a deep bone bruise on her shin from hitting the steering column when she tried to brake.  K's phone had been broken for a couple of days so she had no phone with her. A very nice man/father stopped and helped her call her parents.  She was so upset.  But she knows now that this was not her fault. The police issued a citation for failure to yield to the other driver.  The weird thing is that Mom had just dropped the twins (K's brother and sister) at their home after school and drove right by the accident.  Her mind didn't want to believe it could be K's vehicle, but she turned around to check. She was pretty upset too when she saw K standing there.  Mom got to K minutes before her father arrived.  As K, Mom, and the man who was helping were talking, the other driver was calling to them asking if they thought it would be OK if she went back to her vehicle to get her mask because she had Covid-19!!!  We are so glad she kept her distance, but she probably should have been at home.  The Rubicon was declared a total.  It was six years old and had been K's Dad's vehicle until she started driving.  Her mother and father figured its sturdiness would keep her safe. The vehicle being unfixable was not what her family was planning on, but K's new wheels came home yesterday after all the red tape of getting the money from the insurance company for the totalled Jeep.  Now they have to deal with the additional cost of the new vehicle.  Long story, but in the end we are all thankful that K is just fine. And the other driver is too - no injuries for her.

So now you have the update and we suppose that helps explain our MIA status. We hope to do a better job of posting. 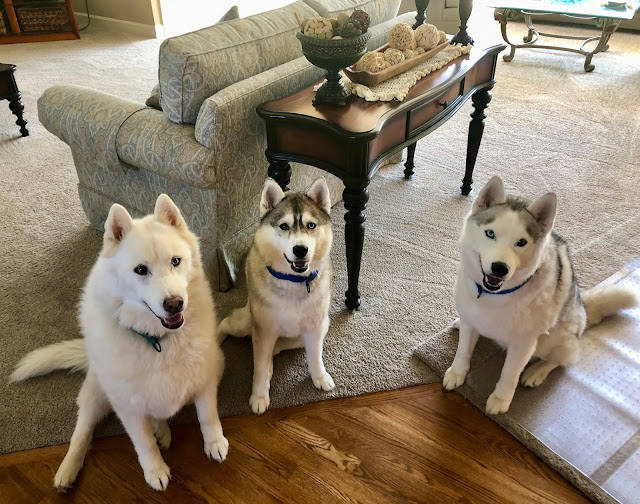 Have a great weekend.

Pee Ess - you can see that bowl of ornaments on the front end of the table in the last photo:)