HAPPY NEW YEAR TO ALL OUR WONDERFUL FRIENDS EVERYWHERE!!!! 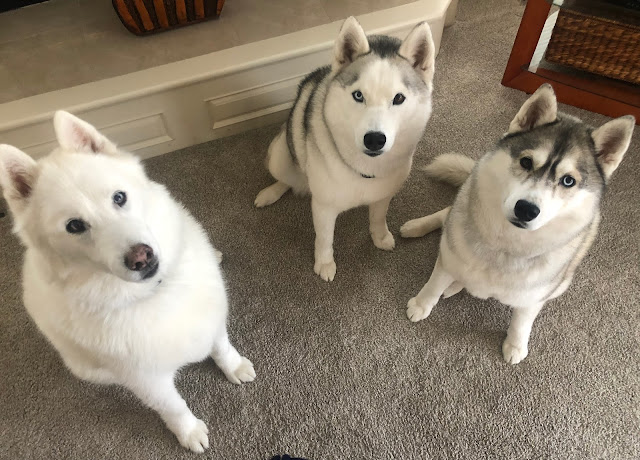 It seems like all we do lately is apologize for being MIA.  And that's what it seems like we need to do again. We had a wonderful Christmas despite a few glitches.  It was wonderful to see our human brother and family.  Chris, Anni, and Jaden arrived on the Tuesday of Christmas week and stayed until Christmas night.  Jaden had a big basketball tournament in Austin, TX that started on Monday.  We made the most of our time together and had lots of fun.  The peeps all went to the Game Show Battle Rooms.  They were divided into two teams, the guys v. the gals.  They played simulations of The Wheel of Fortune, Family Feud, and The Price is Right.  The gals won!!!  They said it was so much fun.  They were nervous because of Covid, but they had a private room with lots of hand sanitizer:)  Mom says it felt like she spent the whole time cooking since they didn't go out to eat.  But one night they had bbq takeout from Jack Stack's.  That made it a little easier on Mom.  Then right before Christmas Eve dinner was about to begin with a big ham feast, the kitchen sink had a major clog.  Horrors!!!  Everyone insisted they switch to paper plates.  Mom was mortified, but at least it makes for a good laugh for years to come.  Thankfully the plumber managed to come around 9:00 p.m. and cleared things up.  Mom was left with a lot of messy pots and pans and silverware to wash.  But it could have been much worse if the plumber couldn't come until after the holiday.

Then one of our human sisters had gone to Orlando with her husband and the two grandsons.  They left the week before Christmas and were scheduled to come home on Christmas Eve.  Well, sister got up that morning with a sore throat and was really stressing about whether she had the dreaded virus.  It was too late to get a test.  We have to be very careful around Dad with that virus because of some health issues. So sadly they decided that it was best if they didn't come over for Christmas.  We face-timed with them, but it just wasn't the same.  But the good thing is that once tested, she found out she was OK.

The other glitch to our holidays is told below. 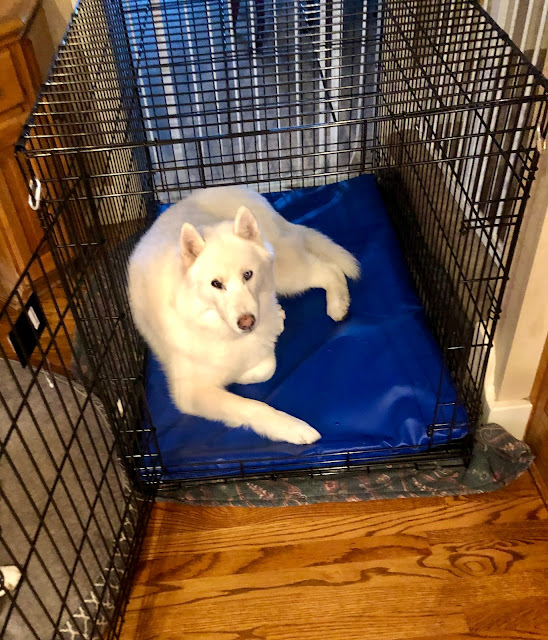 Hmmm, what's happening here? The BIG crate made its reappearance Thursday.  It has been in storage since Misty had her two knee surgeries.  Now, please understand that in his 10 1/2 years, Lightning has NEVER NEVER NEVER gone voluntarily into any crate.  And here he is, much to Mom's surprise, relaxing and enjoying himself. 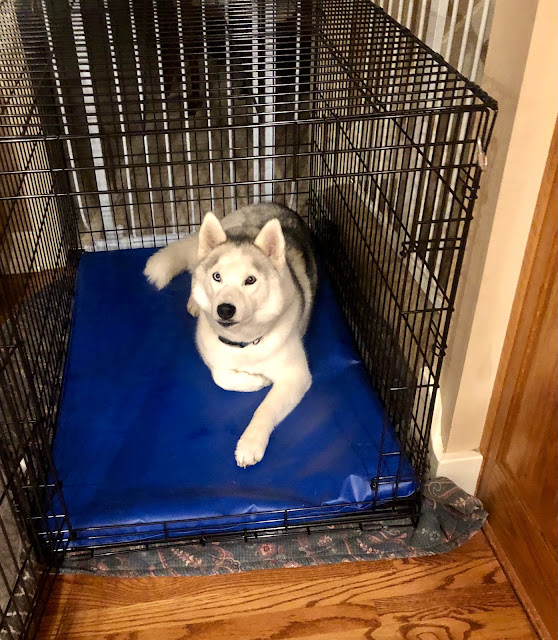 Hey, what's the big deal about a kennel?  Timber seems to think it is a pretty good hideaway too. 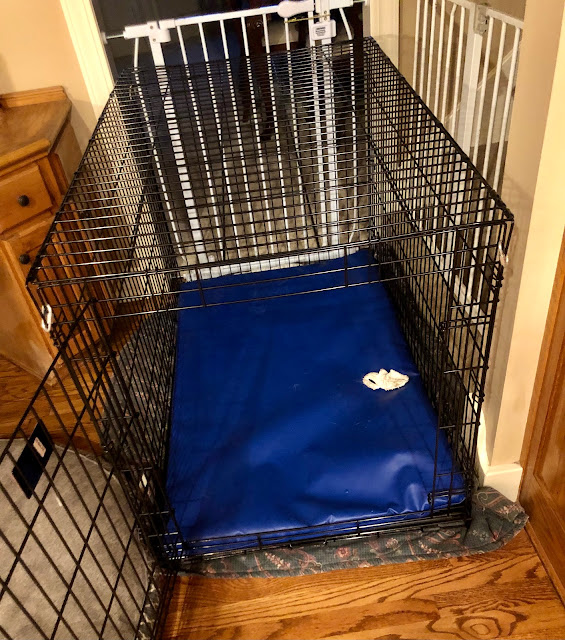 Wait a minute - we bet you were expecting to see Her Majesty Misty next. 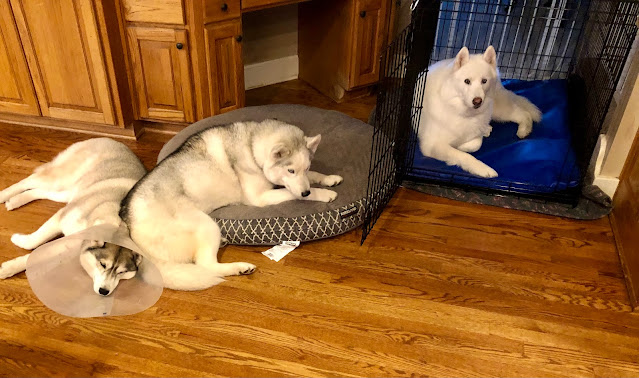 Hey, Misty - don't you want to have a turn in the kennel?  Duh, NO WAY, she says she spent way too much time in there after not one, but TWO big surgeries.
Well, the reason the crate is there is because her cyst removal happens on Tuesday. The vet has said that it is going to be a much more challenging procedure than he initially expected.  You see, the nasty cyst decided to get bigger and bigger and it burst Monday morning. What a disgusting mess!!!  Misty had to make another visit to the vet to be sure it was not infected.  That is when the vet decided that the cyst may be a lot deeper than he thought.  He is also concerned about having enough skin to close the incision.   He talked about some procedure where he will use skin from her back near her tail; he pokes holes in the skin to make it more stretchable to reach the wound.  He won't know exactly what will be needed until he gets started. What does all this have to do with the crate?  Well, you know our Mom worries about everything and tries to anticipate everything. She thinks Lightning and Timber may be drawn to the wound out of curiosity and decide to lick it.  So when Misty comes home and isn't under Mom's eagle-eye watch, she will be penned in the kennel:(  AND she will have to wear her cone. She is coned now because the popped cyst bothers her enough that she tries to get at it. 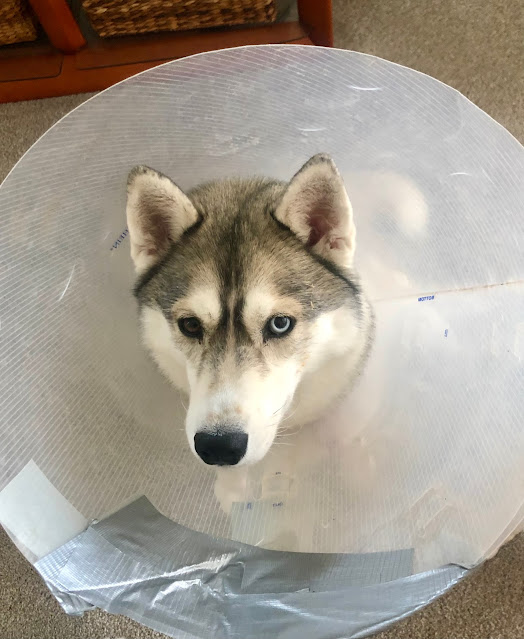 Sheesh, I have been in this silly lampshade for about two weeks now.  (Mom adds that Misty has been very good about wearing the cone) Today we have single digit temps, freezing rain, sleet, and a trace of snow.  As you can see, my lampshade cracked in the cold. Mom used some duct tape to try to keep it together until I can get a new one.  We DO have a comfy cone, but I don't like it as much.  I may have to wear it for a day or two if this one cracks any more.
We missed commenting on almost all of your blog posts for over a week now, but we did get Mom to share them with us.  We thank you all very much for the numerous and beautiful Christmas cards we received and for all the holiday wishes.  We will let you know how Misty does after her surgery.  She adds that any and all POTP is welcomed.
Woos - Lightning, Misty, and Timber
Pee Ess - we know we still have that Christmas look, but Mom needs to search her files to replace our header:)